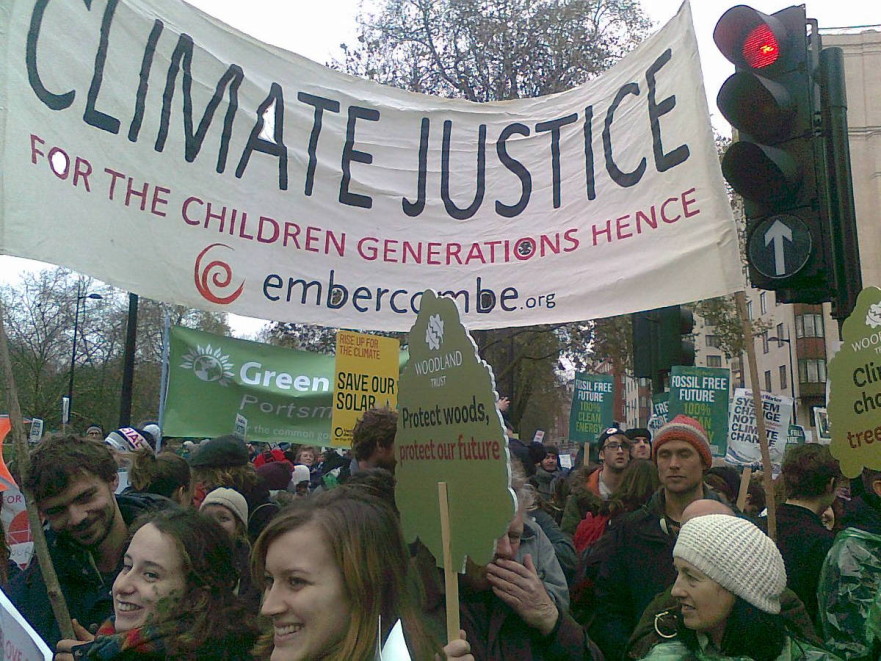 ‘How many people will come?’ I asked myself as our coach passed through the vast urban spaces of West London. On the eve of the UN climate talks in Paris, this march was crucial. I had been to climate marches in the capital before and had always found myself thinking ‘Our future is hanging in the balance – why so few?’. The crowds of shoppers outside Harrods and Harvey Nichols were a sobering reminder that many would be choosing to do something else with their Sunday. Then, approaching Hyde Park Corner the crowds abruptly changed – they were all walking in one direction. I saw banners and fancy dress costumes flapping in the wind, smiling faces, and I knew that this would be the biggest one yet.

Events at Embercombe over the last couple of months have given me hope. When we first talked about the march one morning around the fire, I had no idea how energised the community here would become. It started with a few of us saying we wanted to go, then somehow the idea caught on. We made a banner, printed flyers, campaigned on social media and even went singing in Exeter to promote the march. In the end seventeen of us made the journey to London, more than half our community. It seems that just as the decision in any community to ignore the climate crisis is, to a large extent, a collective one, so too is the decision to act. And it’s possible the tipping point in other communities, cities and nations might be closer than we realise.

The march itself was a wonderful event. It felt like a carnival with samba bands, jazz musicians, a menagerie of giant animals from lions to sea-horses, and Thom Yorke DJ-ing from the back of an ice-ship. I found it hugely uplifting to join tens of thousands of people who felt moved to speak out for other humans and the living world. I hope this spirit reaches the politicians negotiating in Paris, yet whatever happens there, the need to keep engaging with this challenge will remain. What is striking for me is how the enthusiasm and joy that are released once a community starts to work together put the long haul ahead in a new, more inspiring perspective. As Mac has said ‘What an exciting time to be alive’.