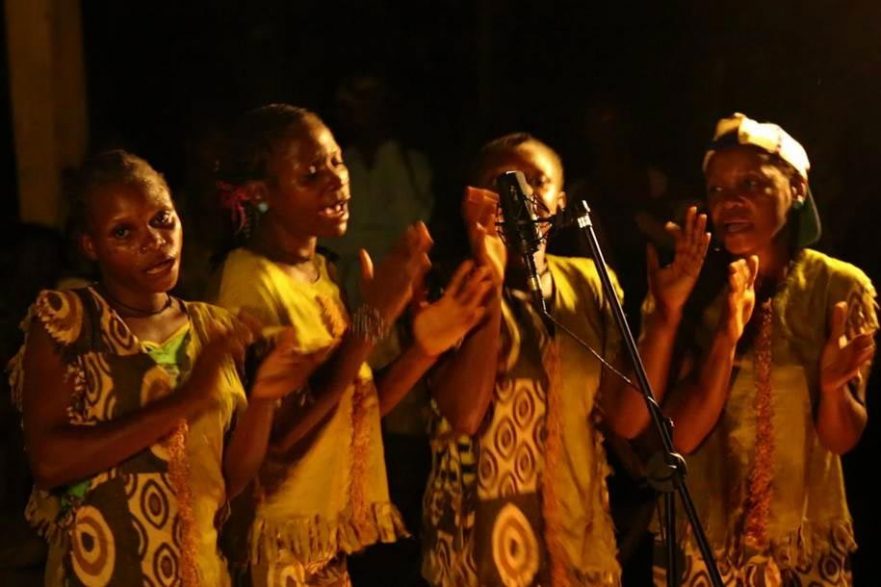 There are no upcoming dates for this event.

Forest Voices – A film by Davey Poremba
A film about the Baka rainforest people and their music, born out of a 25 year musical friendship between UK musician, Martin Cradick of the band, Baka Beyond, and a group of Baka Pygmies from the Cameroon rainforest.

The Baka are currently being forced to live in roadside communities throughout the forest region. The film follows Orchéstre Baka Gbiné, the only entirely Baka band in Cameroon, touring these communities, playing music, showing films in the Baka language (revolutionary in itself) and giving people the chance to talk to camera, discuss common problems and have a means to let their voices be heard.

For millennia the rainforest has been home for these hunter-gatherers. Their culture has become extraordinarily musical since listening and interpreting natural sounds ensures survival. Song and dance permeate their lives for ritual, for fun, and to unite and create harmony within the group. This traditional lifestyle is being denied them as they are being forced out of their forest to roadside villages. Promises of a better life with education and medical facilities are empty as extreme poverty, discrimination and exploitation deny them access to these, whilst they lose the ability to find a livelihood from their forest and are made ashamed of their forest traditions. Their belief in abundance, with plenty to share with all, is eroded and their children are losing their link with the forest.

Martin Cradick has nurtured ‘Baka Gbiné’, helped them record their music and get it heard throughout Cameroon and sold and acclaimed worldwide. They are well known in Baka communities so drew in crowds by playing and then the gatherings were showed films in the Baka language that encouraged the Baka villagers to speak to camera about their situation, help them to feel empowered to change the future to something that is more fruitful for them. Now, for the first time, their voices can be heard….