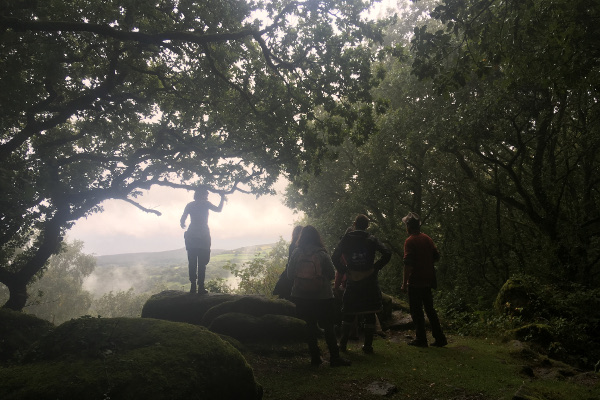 I imagine all kinds of roles that I would love to have in the adventure of life. In association with the council of law that sits around the fire in its traditional sense, just as in the film Last of the Mohicans with the proudness of the fight scene, unfurling itself with the music as it moves towards the end of the film. These things and much more touch the core of my being, the marrow in my bones, wondering what it would be like to be alive at that time, in that culture, yet I am alive in ours.

Often I hear of the commemoration of the war battle and deeds of sheroes and heroes, and there are many, along with streams of earnest pride saying ‘lest we forget’. I have already forgotten. I know the history in our classrooms, in education, is teaching us next to nothing of our own tribal roots. Over these last two decades I have learned and studied more about our history from the people around me on this small devon hillside than in any other context.

Over these last two decades I have learned and studied more about our history from the people around me on this small devon hillside than in any other context.

I have no dates of remembrance of the devastation of our tribes and tribal lands, a few murmurs of Iceni and Boudica and kelts with flags waved are the legacy of our times before Romans. Maybe I’m ignorant and flippant here,  yet millions of our tribal peoples have lived and died and I have forgotten.

It would be so easy, I notice, to align our chiefs, sat around a fire that calls for action in our world. As easy as it is to conform to an idea that action looks a particular way. I notice how everyone is a chief, with the actions they are taking in their daily lives often aligning with the songs of a children’s fire.

I observe a chief who feeds a crow, with his velvet cloak, a crow who has taken this chief under his wing just as the other songsters have. I observe the fox who comes looking, wondering ‘who is this chief appearing in my land?’. A child who became a man and built a log cabin, a cabin where stories are woven from the dreaming of gathering people sat around the cuckoos nest table, seeking new ways of governing. The father who plays in a canoe with his children, in the rivers, with the laughter of frog spawn discovered in marmalade jars and their delight sung into a life forever of the children’s journey.

I observe sheep who teach the children how to sit, how to listen, and the grandmother who speaks to the stars and takes us with her so we can understand something more about ourselves. The mountains that call people to ride windy trails with shiny spoked wheels streamlined for breathless beauty, as they do, she dances their heart into her skirts, placing them amongst the heathers, forever dreaming and teaching me about the grief of my life.

The forest calls out to me to bring trees for loved ones cherished beyond words, forever I look to the skies, seeing clouds in bright light, wondering if it will be good enough for what I would like it to be today.

Women and men who gently walk into the healing of their lives, seek more time for this precious gift called life. The young who are watching from veils, waiting for their chance to show up and take a place, and the seekers, the carers and the adventurers, mindful to be present, to make a difference, no matter how big or how small.

Yes, Chiefs. They can often look asleep, can often look like nothing is happening, but try talking to the bramble chiefs and ask them to stop running all over our gardens, or to deer chiefs, asking them to stop eating beloved strawberries or jays to stop planting oak and ash where they choose.

Our rivers love shiny coins spinning onto river stones, they love the boiled sweet along with 100% milky white super dupers, organic pajamas, chocolate laced with pink salt, from the streets of prayer flags, they love a song and the soft whisper of beings moving by.

Oh yes, what a role a chief might take. What to stand for, to stand by? I will have ignored many chiefs today in my heart I know that they have not ignored me, or my actions, in the wonder of this world that I love.