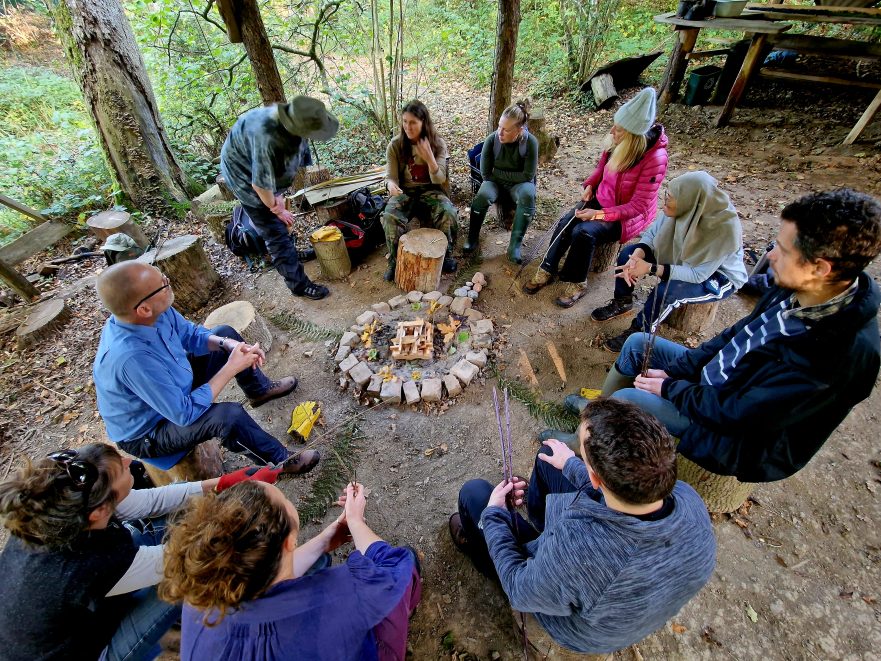 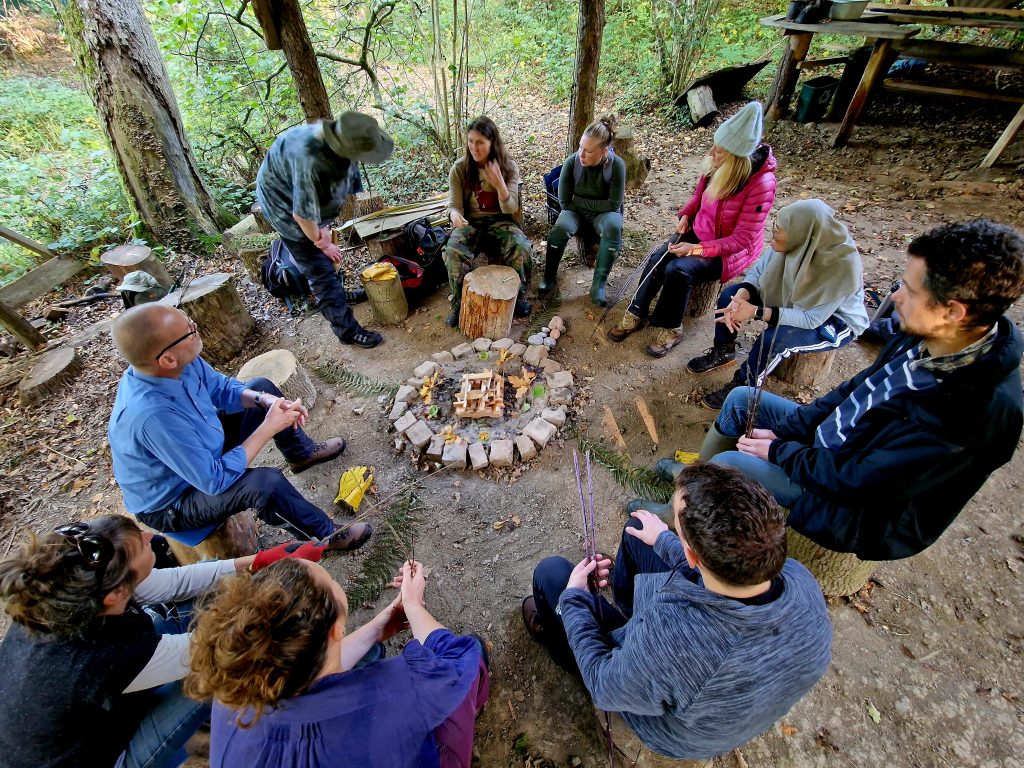 Darran Hughes shares his recent experience of joining Embercombe’s Autumn Rewilding Camp as he discovers rewilding is not just about the land and plants and animals but about rewilding our souls, our relationships, our communities and ideally our culture.

It’s hard to imagine it’s been nearly a decade since George Monbiot first released his best-selling book “Feral”, which I first read two years after its publication in 2013, and then again while tramping 282 miles around the countryside earlier this year.

As a topic, over 6,000 people in the UK search google for information about it, EVERY month. Yet, for too much of the population, Rewilding is “Just another conservation thing” along with cheap solar panels and fracking. And I must admit that even for me, a two-time Feral reader, it was still an idea that made sense but felt too big an issue for me to be able to impact. It was for farmers, landowners, and conservationists to be debating about, where any initiative with less than 1000 acres just wasn’t worth looking at.

Oh, how wrong could I be…

When in October 2022, I joined Embercombe’s 4-day Rewilding Camp in Devon, I attended with open curiosity, but also a basket full of preconceptions, that was soon to radically expand and enliven. Embercombe is not just a “place”, it’s an experience! And if you’re used to the close-quartered busyness of urban, or even suburban life, then it can be a restorative and beautiful shock to the system, as the land begins its tentative embrace. 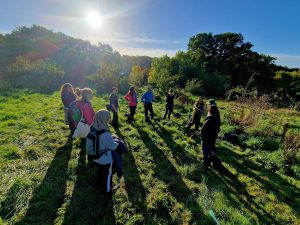 The wooded valley that Embercombe is nestled in, is as accommodating, and nourishing as the heart of those who live and work there. More than that, Embercombe and its facilitators “walk their talk”, and present a place of truth, where the stark reality of today’s environmental situation is met with a grace and compassion that has strength and focus.

It should be no wonder then, that when the team began to unpack the programme before us, it wasn’t just the structure and knowledge of Rewilding that was shared with us, but the ethos, principles, and even culture that underpins Rewilding, in practice. We moved effortlessly from being taught to seeing being done; from finding facts to feeling connections, from diligent detail to the soulful depth of being present in the moment.

While the team’s experience and knowledge are very impressive, as an instructor/delegate collective, we begin to share our own thoughts, ideas, values and hopes. In four days, we went from enthusiastic strangers to aligned allies in a pilgrimage to both bond with and hold reverence for the very essence of nature. In all its magnificent glory and innate intelligence 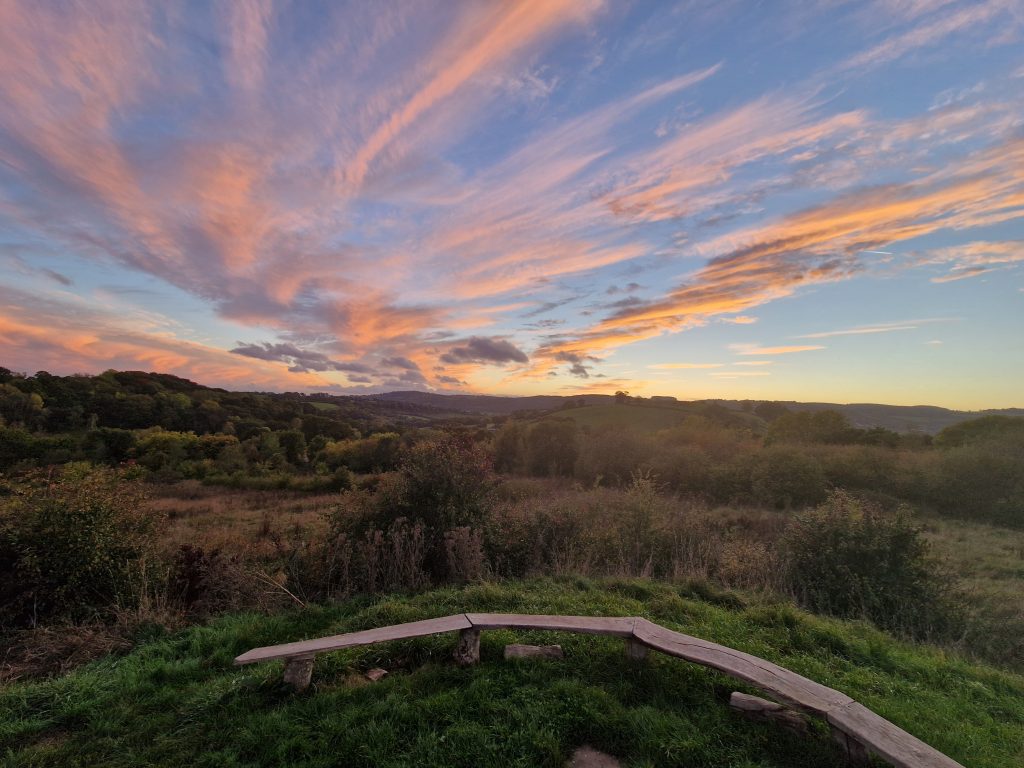 However, amongst all that joy and inspiration, we were always mindful that this was just the beginning. Because change requires commitment, communication, and collaboration, and by the end, we were hungry for more. We wanted to know and were provided with discussions on, everything from finding fellow rewilders, to funding and facilitating rewilding projects, and how even a backyard and a band of neighbours can be rewilded to achieve greater biodiversity or bio-density.

For me, the greatest shift was suddenly appreciating that rewilding doesn’t come as a “List of Rules” but is a blend of understanding how nature works in its unique setting and recognising that OUR true nature is part of that nature, and we are evolved to work symbiotically. Rewilding isn’t just about the land and plants and animals. It’s about rewilding our souls, our relationships, our communities and ideally our culture. To work WITH nature, and not despite it

To me, Rewilding isn’t just another way of being, it’s THE way of being, to massively increase my horizons of impact and hope for positive, nurturing change for the planet, and for humanity.

If you’d like to see a little taster of what went on, you can watch the 3 minute video montage here: