Dedicated volunteer and programme lead to the Journey in 2018 shares his experience of welcoming the birth of his daughter on Embercombe’s land.

At the beginning of 2018 I had taken on the role of programme lead at Embercombe. Lucy was 6 months pregnant when we moved to Embercombe to live there.

I had wanted to live in Exeter, or in a village in the area to be active and involved in a neighbourhood. However, because Lucy loved the land at Embercombe so much, and she loved the idea of still maintaining a high level of involvement on the land up until the birth, we had decided to make our home in the cabin next to Centre Fire for our time of becoming parents.

Embercombe agreed to a home birth, if it wouldn’t interfere with a programme. The due date was 2nd May and there was no programme scheduled around this date. On the 5th of May Frida had still not made any signs of wanting to see the light of the world and on the 6th The Journey was due to start. For 4 years I had been involved in every Journey, but for this one I had precautionarily taken a break.

On this 5th of May then we both had a strong sense that today would be the day. Lucy had got her round belly painted by all the women on site in the morning sun while my sister was preparing food to sustain us during birth. Lucy then got treated to a massage by Cindy while I was sitting with Joey at the fire I had built for Frida, Lucy and myself. Everything was in tune and aligned and at 10pm her contractions started.

I had worked up until the due date and then finally had time off. It took me a while to calm down from all the busyness and I realised that I had not prepared for the birth in the way I had wanted to. My heart sank as I realised that I had allowed other things to be more important than the birth of our child. So, on the morning of the 4th I decided to build a fire pit, which is still the fire pit in a square placed in the four directions outside the cabin. I went to find four logs that were solid and reliable, and as I was picking the logs, I spoke to them all that there was in my mind in relation to birth, speaking gratitude for my own birth and everything I was given up until this point in my life, and picking flowers and digging the pit and placing the flowers in there, as a means to be in relationship to beauty and the blossoming of life, all the while speaking to the flowers and the fire pit as I built and decorated it. That was the way I arrived in a state of presence with this threshold of becoming a father.

Joey arrived on the 5th, as the Journey was about to start, and together we sat down by the fireplace I had built. He added a few bundles of prayer, story and beauty that he had brought to the fireplace. Things he had been carrying with him for a long time, waiting for the right moment. The beauty of the blessings was heart-breaking.

One of the questions that was with me strongly was where my place was as a man in the birth of my child. I had been raised with the idea that this was woman’s business, and I had these questions of what my role was on the day, and I had not really arrived at an answer just yet that had come from within me. To build that fireplace was a significant piece as it was a part of what I felt I hadn’t done enough of, which was to create the space in which a good birth could happen, a space that is solid, reliable, welcoming and safe.

When her contractions started in the middle of the night, I decided that I would light the fire with the sun coming up, greeting the dawn of a new day – new life. In building the fireplace and lighting the fire, I had created a space for the community here at Embercombe to be present at the birth and stay by the fire, to be allowed to be present with the birth, and I realised what a beautiful gift it was to be allowed to be present to a birth, any birth, the same as in death. So the community gathered around the fire, and tended to it, made music and sang and we could hear them from inside the cabin and it was wonderful to have them alongside us on the journey.

By 6pm, 20 hours after the contractions had started, Lucy was exhausted, and said she wanted to go to the hospital. Once we arrived, Frida’s birth happened really quickly and she was born just before 9pm. So, when people say Frida was born at Embercombe, it is true for me. I know now that giving birth is so much more than the moment of the baby coming out of her mother. Frida’s birth began with Lucy getting her belly painted, the massage, the building of the fire pit and happened while being welcomed and sung into this world by the Embercombe people tending her fire.

We returned to Embercombe in the early morning of the 7th. Joey and Kanada had tended the fire outside the cabin until late into the night. In the morning when the sun was up again the fire was still smouldering and smoke was rising gracefully as if to let the world know that all is well.

So, Frida was born at the beginning of The Journey and we will always be grateful for that. To spend the first week as a family surrounded by the energy of the Journey here on the land was such a blessing. It was a beautiful sense of being alive, whenever we came to a meal there was a sense of celebration of life in all its diverse forms, Frida was held by so many people with so much love, and it was amplified by Joey not missing any opportunity to welcome Frida into this world with the Journey participants present.

And all I could think of was how blessed she was to come into this world, to see the light of this world surrounded by people relating authentically to one another, being in relationship and participating in life as humans so beautifully. The whole week we felt held in community, in love and friendship. 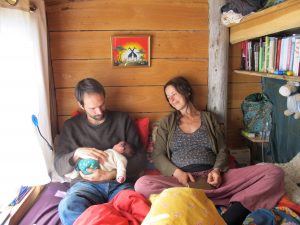 As part of the Journey there is a choir that is held by Helen Yeomans and we joined in. I was crying all the way through. I had Frida in a sling on me with the choir surrounding us. To stand in that circle of 30 or 40 people singing a lullaby, there were just tears of joy streaming down my face, and Lucy’s too and at some point the whole circle was crying.

I think it was a gift to the Journey participants too, as newborn children have this radiance and innocence around them. They just radiate out pure innocence which we all carry in us, so I think it was a gift of mutual giving and receiving being part of that Journey programme and for Frida to be born at the beginning of it. She was held by so many people and showered with love during the first few months of her life and we will forever be grateful for the experience.