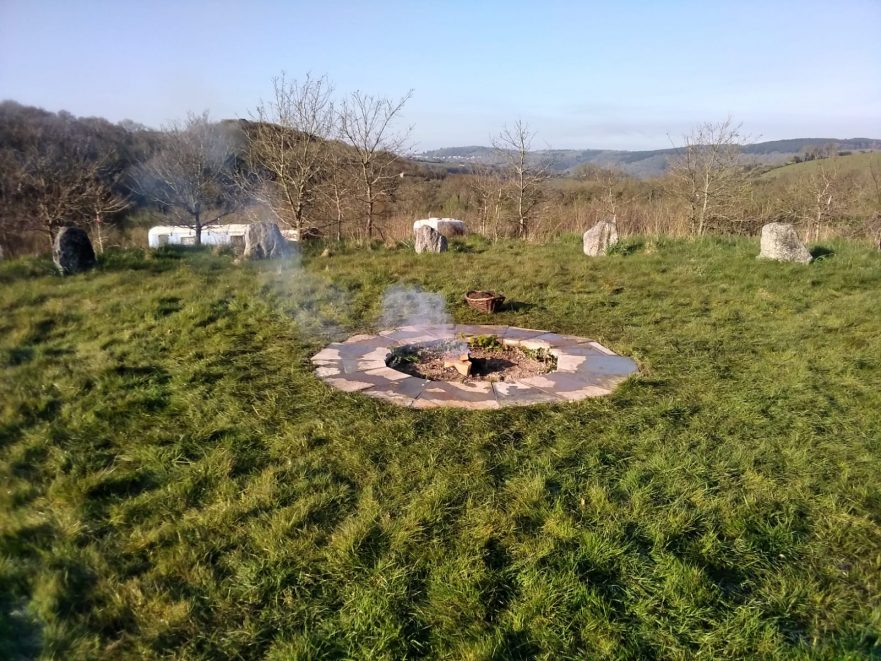 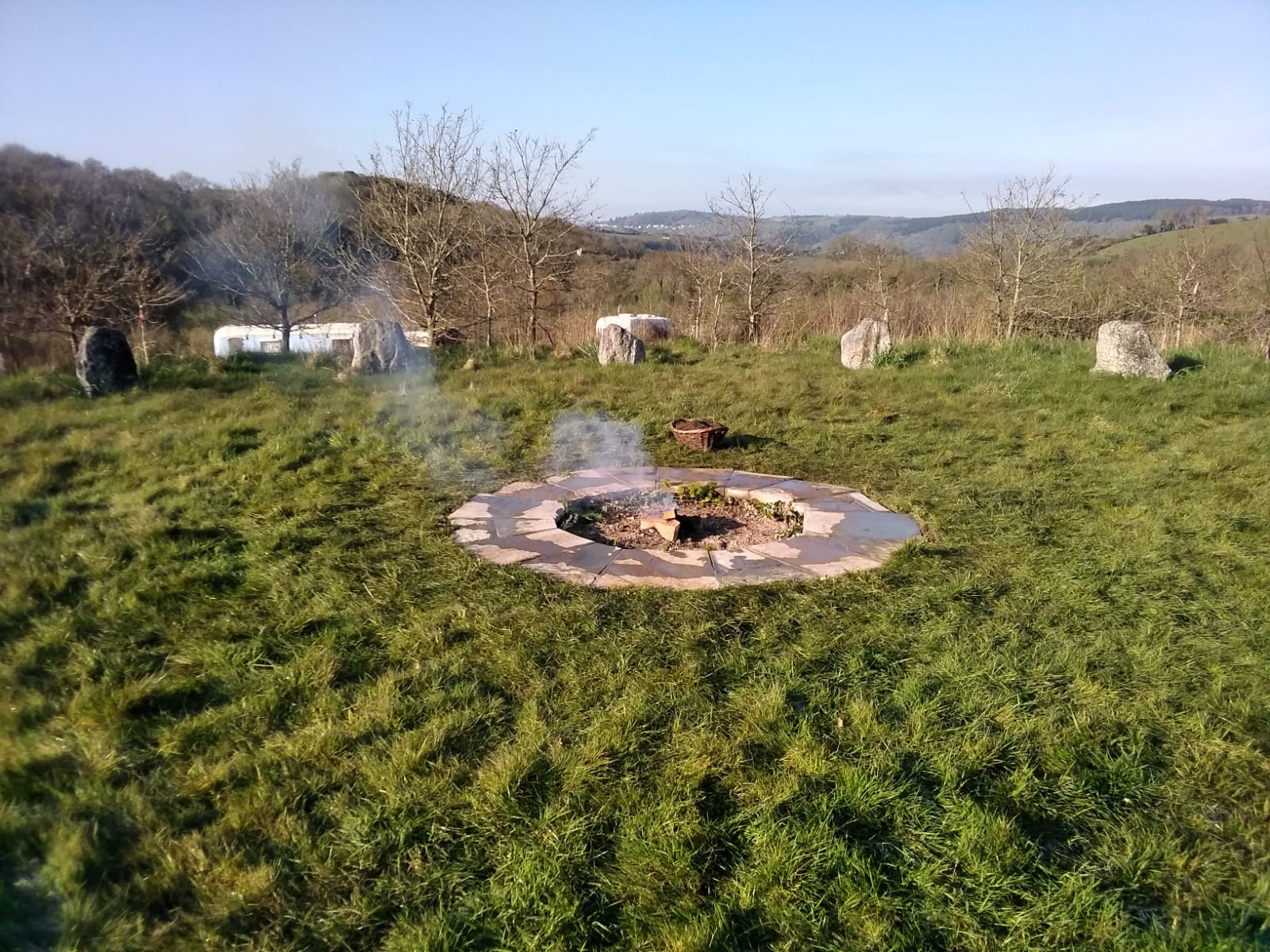 New magic has been taking place on our land and we are honoured to have a new addition in our Stone Circle ahead of us formally opening our to programmes and venue hires this month. Justin and Efua, participants from The Journey, completed this sacred work of laying some wild beautiful yorkstones into a hearth for the fire in the Stone Circle and describe the process:

Justin and I completed the sacred work of laying some wild beautiful yorkstones into a hearth for the fire in the stone circle. These flagstones had originally been in the basement of our house, believed to have been in the farmhouse which had been on site here before ours was built, as one of them is beautifully carved with a date 1753.

This writing is to complement the short film showing the physical work, which Justin has made, to share a little of my perception of the subtle assistance from the other, more than human, in this process.

I am in a swirling sway between agonising self-doubt and complete certainty that things are just as they are supposed to be; the trust dance. When I drop into trusting the outcome (without trying to predetermine what that is), then things flow and real magic happens. On the other side of the wave, with the lack of self-esteem comes something more crippling, fear, which when inside of trips me up, blinds me and doesn’t only stop me seeing the serendipity but actually blocks it from occurring.

So, determined that something so precious as the hearth of the fire in the stone circle at Embercombe would be free of that energy, I undertook careful ceremony to support channeling what was needed and not imposing myself too much.

Swirling a sway
between
self doubt and
Certainty.
Fear begets obstacles.
creates manacles.
locks you in.
So careful self-guidance
a map drawn in
tender trust
Ceremony and
care
Dropping in first
the fire flames flicking
the East stone
alone
recognised me.
The clay came
to demand my
attention
and offer protection
to the rock and the garden.
Safety knot
drawn in yellow
then plotting the compass
and feeling
the energy
of the others;
North, with bubbles in the air
South with her river origins bare
West, the red earth, the setting sun,
the work has begun.
Practical to keep on your bone boots
even in sacred space
the stones are heavy
but then to wash
and to be mindful of the place
to sit
Then I sat
and was here and there at once
in the stone circle
at Embercombe
in the dawn
and here on an urban Yorkshire lawn

Not sure if I was moving only in space, or also in time, feeling blessed to be floating, on the heavy rock magic carpet, yet firmly rooted.

When in that place of listening, able then to hear instruction, things came. I had for a while been in conversation with the clay under our house, being warned that having bared it (digging a big hole for a small workshop) that I then needed to pay attention and be really mindful of it each day. I regularly forgot, and felt told off. However this time, I felt the clay offering protection, so I wrote with the sticky yellow mud on each of the stones, thanking the earth for the gift of the rock and clay and asking for guidance. Each step after that was fluid with the water that runs over the shale bed, with the rivers that ran over the yorkstone, 300million years ago. Water made stone.

Feet in the sticky clay
the yellow dreaming into me
I keep forgetting
and being
chastised
like the absent minded
child
I am
Brought back, with a slimy slap
to HERE
to look West
to feel the wetness
the waters
Learning to be a local
Learning to be local
to myself
Fifth decade
I have to relearn
what I once knew
To fly like I flew
To dance
and prance
and laugh with the other beings
The trees, watching it all
The wind
clouds
rain
sun
pebbles
mountains
river run
All teachers, forgotten
just like
school
archived, but still alive.
So back now
to Clay
today
We dug deep
And found her yellow
demanding
reprimanding
commanding:
Pay attention
Sit up straight
Ears listening
Eyes looking
Heart engaged
Drop in
right in
insight
don’t fight
Feel your skin.

The East stone recognised me first, fire flickering in the iron seams, jumping out at me. The others came after we set out a compass on the deck, drew out the directions and invited whomever wanted to come. Then gathering materials to travel, care-ful to keep any of the usual irritations of daily life out of the work, noticing when I slipped and stepping back into the rhythm.

Once at Embercombe, first feeling that there was something open and raw – Mac had done some preparation to ensure that the new fire would be central and that we wouldn’t damage the little girl and boy stones buried in the centre. Feeling the energy in the stone circle already pulsing. Opening the work with a pre-dawn ceremony of gratitude with Fiona, and what gratitude for the rising sun and the birds! I was moved to bring well water to assist the flow, don’t have to know why or think too hard.

Powerful to cut the turf and work so physically, practically, in such a sacred space, Joey came to tend to this careful gardening.

Using the generator (just outside of the stone circle) to compact the sub-base, strong sense of using the power of the blood of the earth to help lay down the bones of the earth.

Once the ground was prepared we were ready to cut stone, so much easier to switch off ego and be guided.

Finally laying the stones, first a procession to bring them down, I imagined a crowd of well wishers on their journey, laid in their barrow with a brightly coloured blanket to cushion. Then starting at the East, and going sunwise, each stone bedded in. The last slab like a final piece in a key puzzle, unlocking, focusing the energy that is there, streaming out of the fireplace. We replaced the ash from the fires before (the flames of so many wishes, and thanks, and tears and dance) to seal in the magic.

That night I was honoured to sleep in the stone circle (gratitude to Sophia for assisting me to overcome my resistance!), before a wild dawn chorus, with the whole valley orchestra alight and an early ceremony with bringers of gifts and light, to give thanks for this work and spark the first fire, bound, contained and focused by the new hearth.

I was honoured to be invited to lead the ceremony; what a gift to first do this task and then be allowed to read some fresh raw words, in the company of friends, as well.

Right now
the stones
conduct us
like the maestra
at the front
of the orchestra
Just as playing
Fiddle to the stars,
To listen to instruction
don’t use only ears
Turn up
Tune up
Tune in
Our whole bodies
to the stones,
the bones
of the Earth.
The music
playing through
you and listen
now,
the whole symphony,
ROARS.

That night, the self doubt crept back in, which had been so blissfully absent from the work, my sway away from the path, in the trust dance. Right now, sitting still slightly on the side of fear, but simultaneously in deep gratitude and trusting that the message of the children’s fire can be held and renewed and spread wide with the focusing of the hearth.